The boom of cannon fire at sunset will welcome the first Iftar of Ramadan!

Nothing can signify the Holy Month quite like the deafening Iftar Cannon. While the Dubai Police is all set to honor the centuries old ritual, you’re sure to hear it daily during the Holy month of Ramadan. Every day, a single shot will be fired at sunset, at the time of Iftar and 2 shots will be fired to mark the start of Ramadan and the commencement of Eid. And if you’re keen enough to watch it live, here are the venues where you can spot Dubai’s Iftar cannon.

Why Cannons fire over Ramadan?

As the cannons announce the sighting of the new crescent and the start of Ramadan, here’s the story behind this iconic Ramadan tradition.

Its tradition dates back to early 1960s, way back before we had watches or phones to tell the time.While there are many competing legends about the firing of the cannon over Ramadan, they all have one thing in common – the tradition started accidentally. In the 15th century, a Mumluk Sultan of Egypt wanted to test out his cannon that he had acquired recently. And he happened to fire a ball at sunset. To his surprise, the people assumed that it was his thoughtful way of letting his people know they could now break the fast. Another story attributes the Iftar cannon blast to Ismail the magnificent Ruler of Egypt and Sudan. In the late 19th century, his soldiers were cleaning his cannons when one fired by mistake. Again, the people interpreted this as a new Ramadan ritual and applauded the Ruler. Later, a decree was issued by his daughter, Princess Fatimah saying from then on, the cannon would always be fired to mark Iftar. Till date, the Iftar cannon is a much-loved custom carried out traditionally every Ramadan season.

Where to spot Dubai’s Iftar Cannon?

Cannons are positioned across the city and 4 Dubai Police officers are stationed for each cannon. You can spot them at Burj Khalifa, Eid prayer grounds in Al Mankhool and Al Baraha, Fort Island on Madinat Jumeirah and at Dubai City Walk. 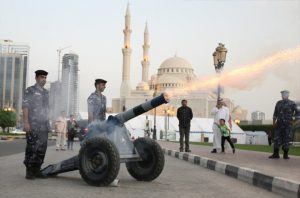