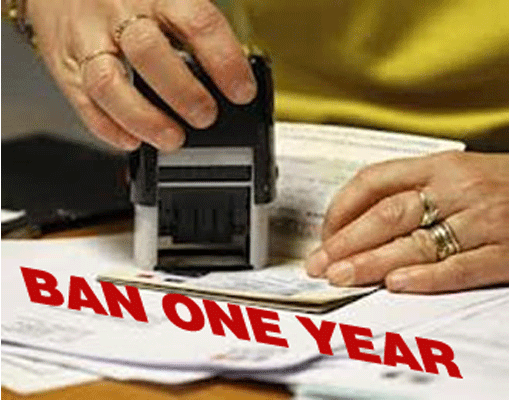 If you are working in the UAE, it is important to know and understand the various types of visa ban in UAE. As the name relates, the ban prohibits a person from entering the country or from taking up a new job. So knowing the various types of bans in UAE will help you immensely to understand and follow the dos and don’ts to avoid getting a ban. Given below are a few visa ban rules in UAE.

Types of Bans in UAE

There are three types of ban in United Arab Emirates.

All countries with the exception of UAE and GCC nationals need permission from the Ministry of Immigration to enter in UAE or any part of UAE. If you have immigration ban in UAE, then you are not allowed to enter UAE or obtain residency in UAE. Also known as Residence ban, it is issued by the Department of Naturalization and Immigration in UAE, which is part of Ministry of Interior.

You can be banned from entering any emirate of UAE if you have immigration ban owing to the below given reasons.

How to Remove Immigration Ban in Dubai, UAE?

The permanent residency ban is generally imposed for serious labour offences committed, chiefly intended for illegal or fugitive workers, illegal aliens or convicted offenders. The Federal Department of Immigration takes note of the fingerprint and scanned samples of these banned workers.

Leaving a job without any reason, breaking terms and condition of Labour Contract or starting another job before finishing the first contract will cause Labour ban on you. Also known as the Employment ban or Work Permit ban, it is an automatic ban which is imposed when you leave your current job without any proper reason.

There are two types of Labour Ban.

This 6-months ban takes into account the employees who left the job without giving legal binding reasons for leaving. It leaves a mark on the labour card or work permit of the employee and the Labour Ministry of UAE is responsible for imposing this ban. Compared to other types of ban, this ban does not have the power in entering UAE. You can either enter the country through tourist visa or just a visit visa.

Every Employee of UAE will be banned automatically by Ministry of Labour (MOL) if you leave a current company (job) without any solid reason, and the duration of this ban will be 6 Months.

How to Remove 6 Months Labour Ban?

This ban is enforced and it is due to resigning any job before the completion of the limited contract. This is the ban that exists when you have lost in your filed case against the labour ministry. To combat this ban, you can opt to begin with the work permit proceeding before the visa expiry.

What is the Reason of 1 Year Labour Ban?

A one year ban will be imposed if you have not completed your limited labour contract or left a Government Job before completing your Limited labour Contract or lost a case in any emirates of UAE against your Company or violated the terms and conditions of your Labour Contract.

How to Remove 1 Year Labour Ban?

Some free zones also levy bans on transfer of employees within companies in the free zones registered within them without the approval of the previous employer. As ban policies differ from free zone to free zone and this policy changes from time to time, information on ban is often not publicized.

How To Avoid Getting Visa Ban in Dubai, UAE?

First and foremost, make sure that your current employer has implemented methods for extension of your employment contract, even before it terminates. The employer needs to go to the Ministry of Labour. While shifting jobs, you need to be sponsored by the new employer otherwise your labour card will get banned. Last but not the least, knowledge is power. Always stay alert and be well informed with the latest rules of Dubai visa, employment issues and amendment of labour laws.
Share this page!