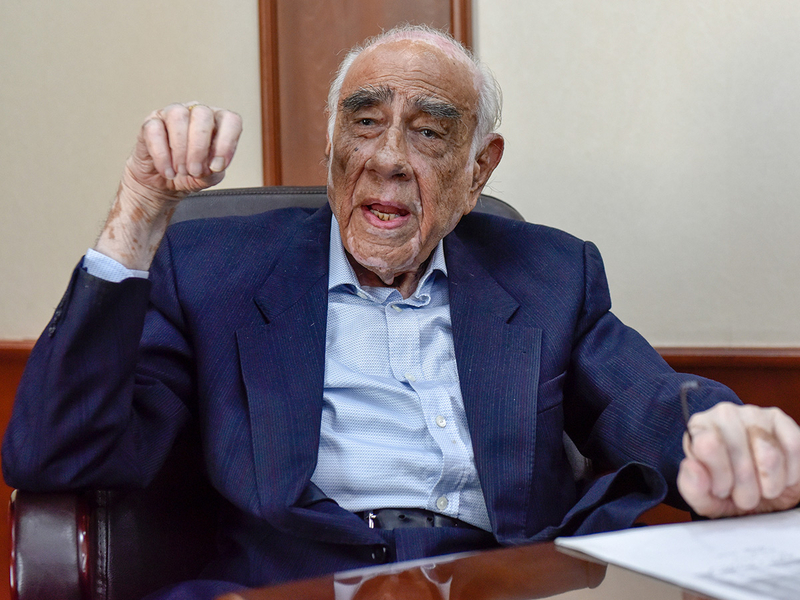 Instrumental in bringing electricity to Dubai, one of the UAE’s earliest residents, Maghanmal Jethanand Pancholia breathed his last on 2 September, 2019. Fondly called as Maghabha by his fellow Thathai Bhatia community members, Pancholia has been much revered as the oldest Indian business leader and a cultural ambassador of Indians among Emiratis. His demise is undeniably, a huge loss to to Indian expats in the emirate. Here’s a round-up of the Veteran’s journey to Dubai and his success as a multi-millionaire businessman.

Seventy-three years ago, when Pancholia first arrived in the Gulf to join his father’s business, he was only 17 years old. The teenager barely had any clue that he was destined to be the great success story of Dubai that has transformed from a hamlet to a bustling metropolis.  In 1942, he boarded a Chinese Cargo ship called ‘Woo Sang’ from Karachi and arrived at Sharjah after a long journey of eight days. The fare was then Rs23. However, Pancholia joined his father’s business of foodstuff trading which he had started after pearl business collapsed due to the global recession in 1930.

Things were not easy back in the 1940s. Every aspect of life was a struggle in the emirate without water, electricity and of course greenery. But his life improved as Dubai grew and so in many ways his growth has been parallel to that of the city. Perhaps, Maghanmal Jethanand Pancholia, was one of the first expats to bring electricity to Dubai. Along with a few Indian expats, he set up a company, Indo-Arab Electric Supply Company which began operations from 1957 until 1961. They supplied electricity to shops and residences from Customs House to Shindaga. Three generators were used for this.

Fondly known as Maghaba, Pancholia founded the Maghanmal Jethanand Group in 1942. He was also the Chairman of Arabian Trading Agency, a Dubai-based company dealing with pearl trading and food stuff during the early years but has since diversified into consumer electronics, home appliances, jewellery and watches. In 1961, he was also elected director of Dubai Electricity – a post he held until the organization was nationalized in 1980. His other high-end posts included founder and permanent trustee of Dubai’s India Club, founder of Dubai’s Indian High School and member of the board of Dubai Chamber of Commerce and Industry.

His Demise a ‘Huge Loss For Indian Group’

Pancholia belonged to the Thatta or Sindhi community widely known in the emirate for their commercial activities in textiles, pearls, gold and money exchange. As the oldest business leader, he was considered a father figure for the entire community and devoted ample time for social activities. He had founded the first community school for Indians here. So, his demise is undoubtedly a big loss for the Indian community.