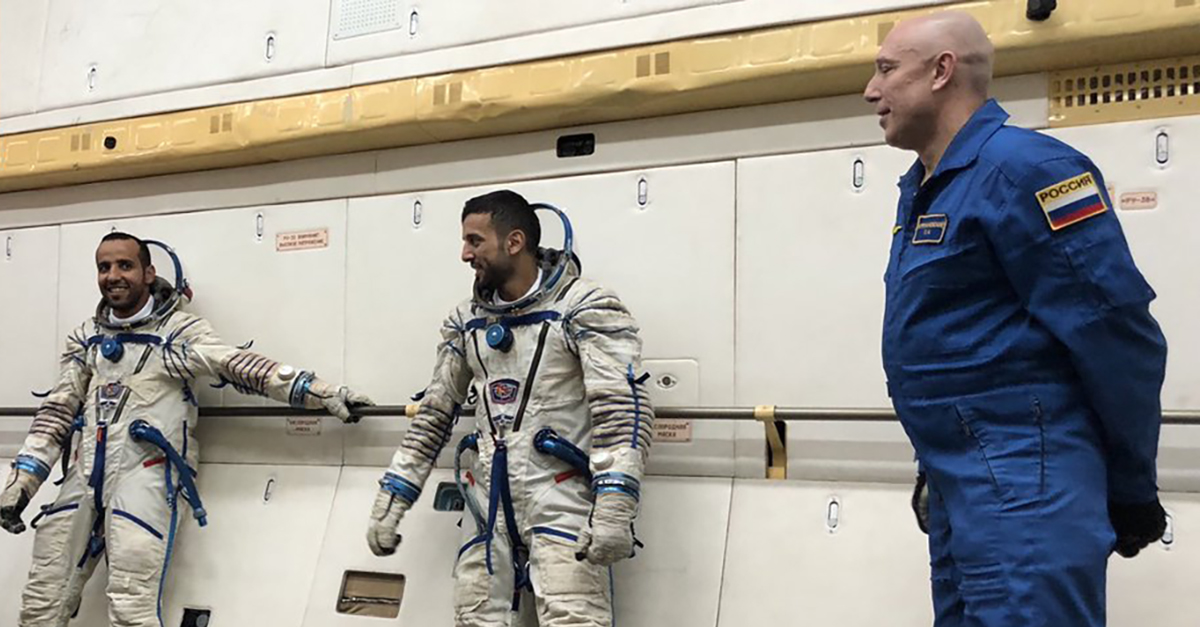 After around 30 hours of theoretical and practical training, the first UAE astronauts are all set to launch into space this September. During a fit check at the Zvezda facility in Moscow, Hazza Al Mansouri and Sultan Al Neyadi tried their first customized Sokol space suits and Soyuz seat liners.

The Sokol space suit or the Sokol IVA suit is worn by all who fly on the Soyuz spacecraft. It protects astronauts from the harmful conditions of space. As it will be the first time an Emirati astronaut will travel to space, every detail is taken care of by the MBR Space Centre. Roscosmos, a team of specialised engineers from the Russian Space Agency has designed two custom Soyuz MS-15 seats. Final checks are being carried out to ensure that the space suits and the special seats are right fit for the two astronauts.

Hazzaa AlMansoori and Sultan AlNeyadi undergoing a fit check of their #Sokol space suits and the #Soyuz seat liner at the Zvezda facility in Moscow. pic.twitter.com/jFyG7LJWED

Hazza Al Mansoori and Sultan Al Neyadi returned to Moscow after completing their training at the European Astronaut Centre (EAC) of the European Space Agency (ESA) in Cologne, Germany. After the 30 hours of theoretical and practical sessions in ESA, the two are all set for an eight-day mission to the International Space Station. Al Mansouri will be the first astronaut from the emirate to take off to the ISS on September 25 and Al Neyadi will be the backup astronaut. Al Mansouri will aboard a Soyuz MS 15 spacecraft for an eight-day stay on the ISS and he will return to Earth aboard a Soyuz-MS 12.

The training focused on the European unit, Columbus, on-board the International Space Station (ISS). The Columbus Laboratory is ESA’s largest single contribution to the ISS, shared by Nasa and ESA to carry out the largest number of scientific researches in a virtually non-gravitational environment. Al Mansouri and Al Neyadi learnt how the equipment and systems in the European unit of the ISS worked, such as the Life Support System that ensures the survival of astronauts on the ISS. It also included communicating with the ground station.

The 34 year-old, an F-16 Block 60 fighter pilot is the first astronaut from the UAE to step into space. Once on ISS, Al Mansouri will be conducting research in various fields to show the effect of zero gravity on the human body in various research experiments, compared to gravity on Earth. Also he will be presenting a tour of the station in Arabic for viewers back on Earth. Also he’ll be documenting the daily lives of astronauts at the station. In early October, Al Mansouri will return to Earth aboard a Soyuz-MS 12 and land in the wilderness of Kazakhstan.