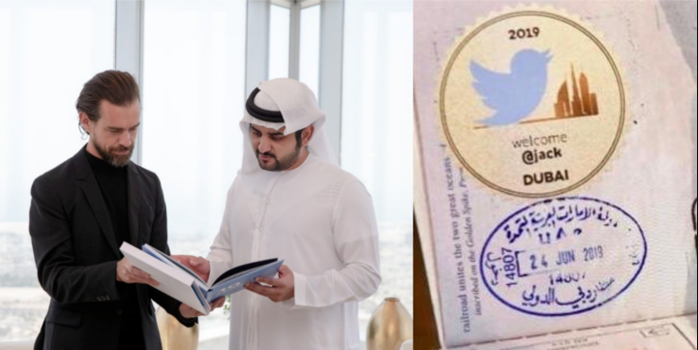 For anyone travelling abroad, clearing security and immigration after a long flight is not the best experience. But if you’re the founder and CEO of Twitter, one of world’s most popular social media platforms, even the experience of immigration at a foreign country brings a smile on the face. Twitter’s Jack Dorsey landed in Dubai to find this special welcome at Dubai’s airport. Along with the greeting message that reads, “Marhaba Dubai” in Arabic, Dorsey received a super cool personalized immigration sticker which has the Twitter’s logo besides Dubai skyline.

Taking to none other than his own social media platform, Dorsey snapped a photo of the special sticker issued by Dubai Customs that was designed solely for his arrival Dorsey tweeted a photo of his passport page with Dubai’s immigration stamp, announcing his arrival in UAE.

On his first visit to the UAE, Dorsey met Shaikh Maktoum Bin Mohammad Bin Rashid Al Maktoum, Deputy Ruler of Dubai. He launched a major philanthropic initiative Youth For Good in collaboration with Shamma Al Mazroui, Minister of State for Youth Affairs. As the name relates, the initiative is meant for the youth, the first of its kind in the world. It promotes the use of Twitter to support humanitarian and social causes and to channel young people’s efforts towards philanthropic work. Youth can share their stories, achievements and inspirations. As Twitter is one of the world’s key social media platforms, the Youth For Good initiative will ensure that its power is put to good use in building a positive change. 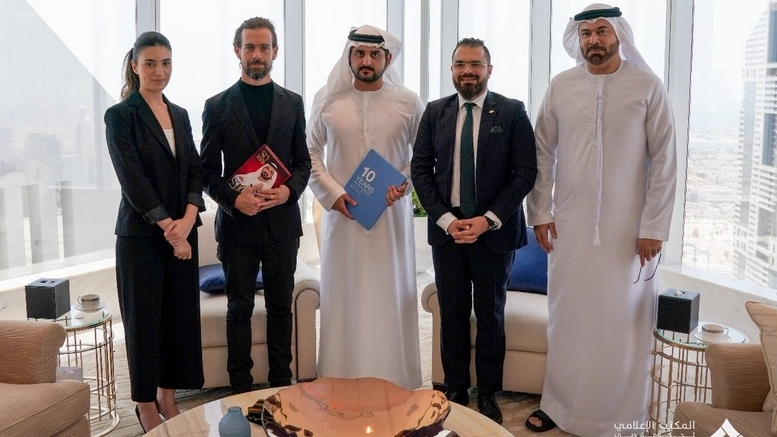 Shaikh Maktoum Bin Mohammad Bin Rashid Al Maktoum, Deputy Ruler of Dubai launched his first Twitter account to commemorate the occasion. His account was immediately verified and surprisingly his followers increased from 200 to 600 in a matter of minutes on Monday afternoon.

We are pleased to have hosted Twitter’s CEO and cofounder @jack on his first visit to the Middle East and the UAE. I am also pleased to have launched my new Twitter account in his presence pic.twitter.com/j916R4UUWB

Tweeptour – Global Tour to celebrate the 13th Anniversary of Twitter

Dorsey is on a global Tweep Tour. He’d been visiting the social media company’s offices around the world. In the past few months he has stopped off in Brazil, Mexico, London, Hamburg, Paris, Madrid, South Korea and Singapore. And before his visit to Dubai, Dorsey was in Dublin. There are a total of 35 Twitter offices globally, 12 of which are in USA. Whereas UAE is concerned, Dorsey’s visit does not come as a surprise as Dubai hosts the only office in the MENA region. Also, it’s considered one of the primary sources for online video content in UAE and Saudi Arabia.