The UAE has prohibited entrance for visitors from South Africa, Namibia, Lesotho, Eswatini, Zimbabwe, Botswana, and Mozambique, effective Monday (November 29), due to worries about a new version of the COVID-19 virus, according to the state news agency.

UAE nationals, diplomatic missions, official delegations between the UAE and the seven nations, and golden residence holders are all exempt from the decision, according to the General Civil Aviation Authority (GCAA).

This includes denying entry to anyone who visited certain countries 14 days prior to arriving in the UAE. Passengers will continue to be transported from the UAE to these seven countries via flight.

The travel ban will go into effect on November 29th. 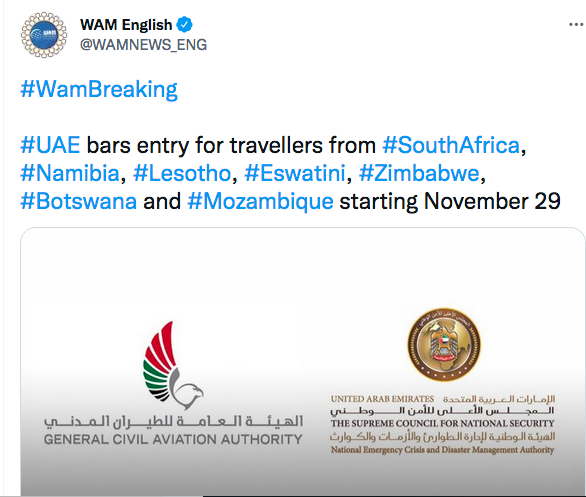 UAE nationals, diplomatic missions, and golden residence holders must undergo a 10-day quarantine and a PCR test on the ninth day after entering the country. Official delegations, on the other hand, must quarantine at the airport until the test results are received before continuing their mission in the UAE.

Those traveling from South Africa, Namibia, Lesotho, Eswatini, Zimbabwe, Botswana, and Mozambique via other countries must stay in those countries for at least 14 days before being allowed to enter the UAE, according to the authority.

Due to fears about the spread of COVID-19, Bahrain has prevented travelers from South Africa and five other southern African countries from entering the country, according to the state news agency BNA.

Bahraini citizens and those possessing Bahraini residency visas were excluded from the decision, according to the statement.

The World Health Organization (WHO) renamed the recently identified B.1.1.529 strain of Covid-19 as Omicron and deemed it a variation of concern.

The mutation has been linked to an increase in new cases in South Africa, but it has also been found in Hong Kong, Belgium, Israel, and Botswana.